Today I have a foil packet shrimp on grill recipe! This meal is absolute perfection when the weather warms up and you’re craving something light, fresh, and effortless. Foil packet shrimp is also a fantastic side to throw on the grill as a side to your main course.

When it comes to grilling, foil packets are fantastic, especially for shrimp and seafood! You won’t have to worry about the delicate shrimp overcooking on the grill tucked away in a little foil cocoon. The foil protects the seafood from direct heat and prevents it from sticking to the grill. It also makes a convenient cooking vessel for additional ingredients, such as veggies and marinades.

How do you keep shrimp from sticking to the grill?

If you’re wondering how to keep shrimp from sticking to the grill, the easiest solution is to whip out your roll of tin foil. While you won’t get that classic char, you can rest assured your fragile protein will make it to your plate and not fused to the grill grates.

When you cook shrimp on a grill, you can place it directly on the grill grate or toss the shrimp in a foil packet. For direct to grate cooking, shrimp is usually skewered and kept in the shell to prevent overcooking–it’s pretty basic. But foil packet shrimp allows for more flexibility and creativity with the dish. Anything you can wrap in the foil is a go!

Do you peel shrimp before grilling?

You may want to know if you can peel shrimp before grilling, and the answer is two-fold: yes, if you’re cooking shrimp in foil packets, no, if you’re placing them directly on the grill. On the high heat of a grill, the intact shell is insurance that the shrimp doesn’t cook too quickly and toughen up.

The foil can act as a protective shell too! So I clean, devein, and peel the shrimp completely before tossing them in the foil packets. In a foil packet, deciding to peel or not to peel is more a matter of personal preference than cooking necessity. I’d rather dive right into my meal than peel away shells before the big event. 😉

Our foil packet shrimp on grill recipe makes enough for eight foil packets. If you’re cooking for a smaller group, just scale it down. In the recipe card below, simply adjust the number of servings and the recipe will recalculate for you.

While the shrimp is marinating, prep your sheets of foil and create small beds of red cabbage for each packet. Divvy the marinated shrimp on top of the cabbage, wedge your sliced limes in there, then garnish with sea salt and cilantro.

Seal the packets and pop them on the grill, about 6 minutes on each side. Once the shrimp is no longer translucent, crack the shrimp foil packets open to release the heat. This will help the shrimp stop cooking and prevent the seafood from getting tough and chewy. Give the packets a nice stir and throw some more cilantro on top to serve.

If red cabbage isn’t your thing, nix it from the recipe or swap it out with a veggie you like better. Chop up some zucchini or slice it into noodly-threads. Make it a rice and shrimp foil packet with riced cauliflower. Slice up some bell peppers or toss some mushrooms into the mix. Feel free to tweak this for your taste buds!

If you want to cook the shrimp foil packets in the oven instead of on the grill, no problem. Just preheat your oven to 400 degrees Fahrenheit and place the packets on a baking sheet. Bake them for 12 to 15 minutes total, or until shrimp is opaque, flipping the packets halfway through.

How to Store Foil Packet Shrimp

Tools to Make Foil Packet Shrimp and Shrimp on Grill

Foil – For foil packet shrimp, the foil is a pretty obvious tool to execute the recipe. You probably have it on hand already and you definitely don’t need anything fancy. But! They do make pre-cut foil sheets which are absolutely perfect for making foil packet meals. As someone who struggles to rip a sheet of foil off in a clean line, these clean-cut sheets make me happy.

Paring knife – When it comes to cleaning and peeling shrimp, a good paring knife is a godsend. It really does make the job easier. This is the one I love and recommend. 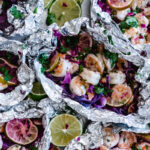 This foil packet shrimp recipe is perfect for grilling season!

Cabbage may be substituted with vegetable of choice or omitted completely. Zucchini or riced cauliflower would make an excellent low carb, keto compatible substitute!

Hey babe! I’m Tasha, the lady behind Ketogasm. I love to get creative in the kitchen, geek out on nutritional science, and help badass ladies like you transition to a keto lifestyle. Whether you are healing with food or transforming that beautiful body of yours, I hope you find the resources on this site to be helpful along your way!